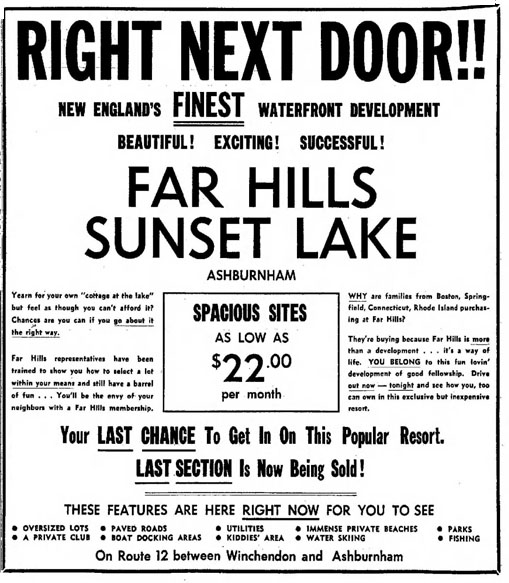 Going back to Colonial times this area of Ashburnham/Winchendon had many small mill ponds on Bluefield Brook one of which was known as “The Inkwell.” It was a deep dark water hole which was retained by a small dam approximately in the area of the now existing Sunset Lake Dam. If you travel along the brook from Sunset Lake heading north or south, you will encounter a series of breached stone dams, the first of which is at the North end of Sunset Lake.

Bluefield Brook is a main source of the Millers River. This series of dams created numerous small ponds along the brook. During the area floods of 1936 and 1938, these dams retained a considerable amount of water and were considered to be a contributing factor to the flood problems. As a result, the dams were breached by the Army Corps of Engineers at the time of construction of the Birch Hill Dam in Royalston. Following this action, the land reverted back to its original form with the small Bluefield Brook flowing through what was once a series of small ponds. The fertile bottom of the inkwell soon gave rise to plant growth and forest. Twenty years later in the late 50’s the developers of Sunset initiated their project enlarging the lake basin by clear cutting to its now 300 acres. They harvested some trees as large as two feet in diameter.

Incorporated as Sunset Realty Trust, the group constructed the dam, filled the low area at our present boat ramp on Winding Cove, closed the gates and then proceeded to fill the expanded lake area with water creating “Sunset Lake” with its coves and islands.

By 1962 the present Tweedo’s (Haig’s) Variety Store served as the first model home and business office. Dunn Road from the office to Tuckerman Road was unpaved. The first road into the Sunset Lake area itself was Noel Drive which started at Dunn Road (Lot 1) to the bottom of the hill making a left turn out to Christmas Island. There were no other roads constructed at this time. In August 1962, the first two cottages were sold. The A-frame on Lot 20, at bottom of Noel Drive and one cottage on Lot 17 Christmas Tree Drive and Christmas Island, had been constructed as model homes when the developers began to advertise and sell the properties. There was no electricity, nor was there any water available at this time. On Labor Day weekend of 1963, water and electricity were connected to these two homes, and the first summer residents of Sunset Lake moved in. For the next five years, the developers drained the water lines and emptied the entire Lake in mid-September for the winter. Since there were no yearround residents none of the roads were plowed.

The following year, Noel Drive was continued on its Northerly route to the Ripple Beach area, and construction was started on the Beach House (renamed “Levins Hall” in 1984) and Ripple Beach itself.  As work progressed, the Trust soon became Sunset Lake Development Corporation. The members of Sunset Lake Development Corporation incorporated the Far Hills Association to become the owner/managers of Far Hills. Roads were built and paved, by the mid-1960’s an underground water main was installed from the Sherbet Road connection with the Winchendon main to the intersection of Balsam and Winding Cove. However, due to the expense required to blast the ledge, only a 1/4 mile was completed along development roads and the remaining system consisted of 2″ plastic pipe laid on top of the ground. This minimal summer service was soon inadequate to supply the needs of the expanding population and the desire for year-round water.

In 1967, we had two year-round family residents (with private wells). The Far Hills Association members adopted our present By-Laws and negotiated with Sunset Lake Development Corp. to become the new owners of the water distribution system, the common lands, roads and Sunset Lake, assuming all tax liabilities and jurisdiction. Two years later, the Far Hills Association members voted to continue the installation of the underground water distribution system at a cost of 175,000. This was financed by a $500 per member assessment and took six years to complete the loop around the lake with all the branch lines. At various times, individuals and groups have unsuccessfully challenged the Far Hills Association’s authority over its property.

The years from 1992 to 1994 have seen many changes in our corporate identity due to changes in state and federal regulations. Through the years, the Far Hills Association has evolved into a family-oriented, democratic organization able to control its own destiny through the annual membership meetings. Various activities, recreational opportunities and equipment are sponsored by the Association.

Because Sunset Lake is not classified as a “Greater Pond” in the Mass. General Laws, Far Hills Association, as owner of the Lake and its water rights, has been able to stock the lake with fish, limit access, provide for its ecological health and maintain the dam. This control, coupled with total ownership of the roads and the water distribution system, makes Far Hills Association a uniquely independent corporation.

In 1962, it was difficult to imagine “Sunset Lake” as it exists today. The visionary approach of the developers at that time, their persistence, and the loyalty and financial contributions of the members of Far Hills Association as well as the dedication of those members who serve on the board of directors have made all of this possible. 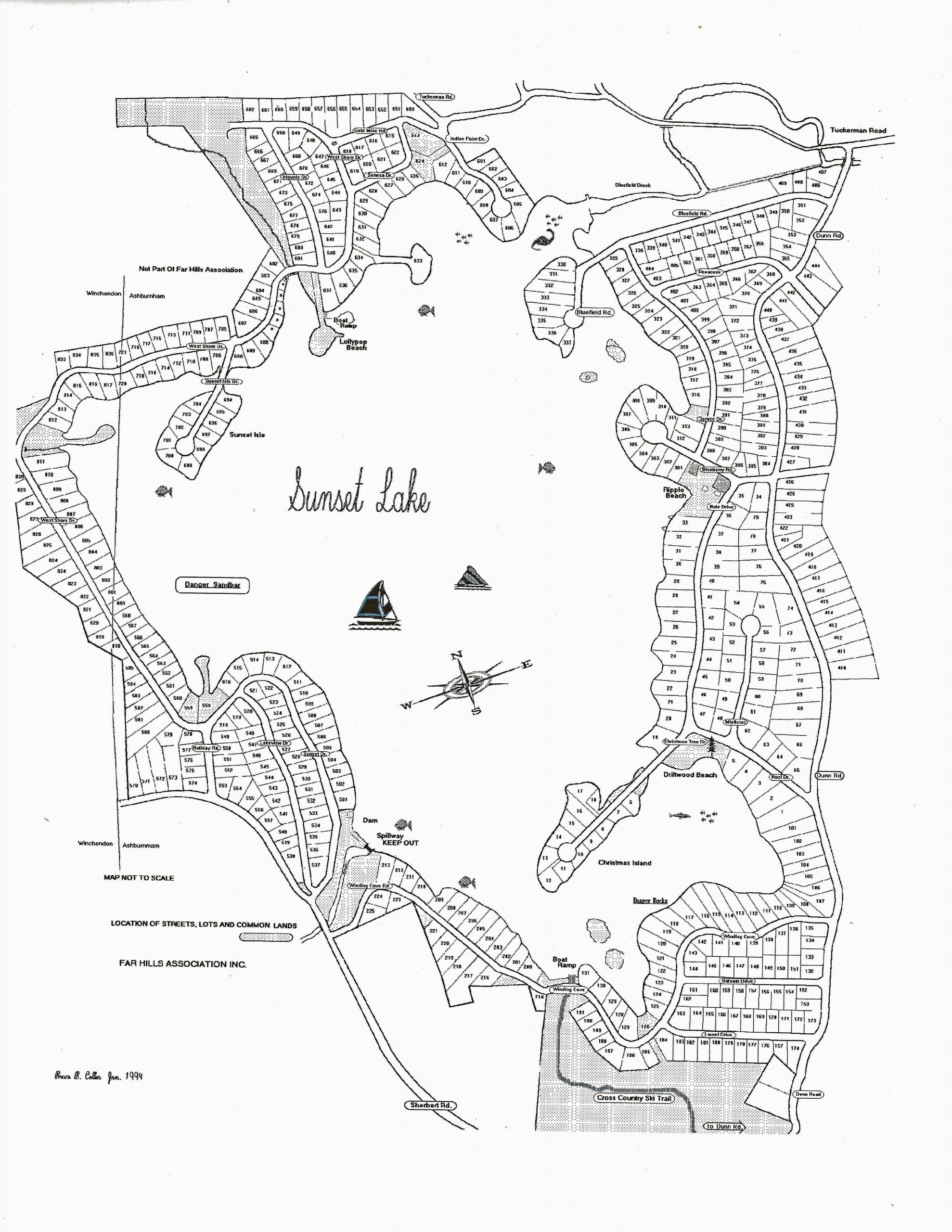